Liceo Scientifico “Eugenio Curiel” is located in the suburbs of Padova, it is attended by about 1000 students aged 14 to 19 and there are 84 teachers who work there. The school is run by a headmistress and a group of deputy headmasters. All the students live in the surrounding area and they belong to the middle class. A small percentage comes from families of immigrants, fully integrated in the social context. 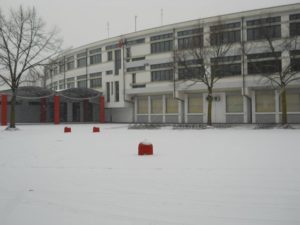 The main subjects are related to the various fields of science. In particular, the students attend courses in Mathematics (usually four hours each week), Physics (usually three hours each week), Biology (from three to five hours each week). But all the courses have Italian, History, Geography, Arts, Philosophy, Foreign Languages (English, French or German), Physical Education. Liceo Scientifico “Eugenio Curiel” gives a basic preparation in different subjects so that, after attending school, students generally enroll in university.

Special interest is devoted to Maths, Science, Physics, Chemistry and Foreign Languages from the first to the final years of all the courses. Apart from the programs, which are compulsory for each subject, many students are involved in various projects in some branches of Science and Languages.

Many activities regard the field of foreign languages with special courses of preparation for language certificates, language courses abroad, conversation in a foreign language, lectures on foreign cultures and literary topics. For instance, in order to create the right connection between the language and the scientific field, since 2015 an additional weekly lesson on scientific English has been added to the classes of the third year of two courses, to create a group of students capable of obtaining positive results by using diverse skills. Moreover, for about 10 years Liceo “Curiel” has been seriously operating to organize cultural exchanges with other schools in France, Germany, the Netherlands, Hungary, Slovakia and Australia.

In addition to this marked interest in foreign languages, Liceo “Curiel” has been involved for several years and is still involved in many Science projects such as international Math and Physics Olimpiad, International Masterclasses in particle physics, special courses organized by the “Università degli Studi di Padova”, the MATh.en.JEANS project. The purpose of the mathematics department is to stimulate the enthusiasm of students on non-standard subjects. That’s why in the last few years our school has been taking part in so many different projects.