The Maths&Languages Erasmus + project will be a full-scale test for MatLan approach, it will go further in linking MATh.en.JEANS mathematics research workshops and language teaching and will be an incubator for teachers and researchers from 5 European countries to optimise this approach.

What is a MATh.en.JEANS mathematics research workshop? –

The concept is based on twinning two groups of volunteer pupils in two different schools.

Pairing 10 European high-schools and accompany them into its mathematics research workshops. These workshops will integrate the MATh.en.JEANS approach and foreign language learning following the model of the MatLan project. M&L workshops is inspired from a real research approach. High level mathematical research like science research in general is based on international cooperation.

Carrying out this project internationally with this 10-school community allows us to reproduce the interactions researchers have during their careers about research topics they share with their peers in the world. We think that this strategy is proposing pupils a real immersion in doing maths as researchers do it that will lead to achieve our goals in terms of mathematics and language learning and international cooperation. 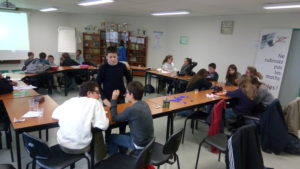 1/ Improve their level of foreign language and mathematics by: