Vaclav Havel High School, which opened in 2012, is the first positive energy high school in France: in this “smart” high school, energy production, thanks to photovoltaic solar panels, is greater than the building’s energy consumption. Bègles’s new high school which offers general, technical and vocational courses opened in 2012 with 830 Year 11 students in the general stream, lower and upper sixth students in the technical stream (ST2S), a vocational education department and a Higher National Diploma (BTS). Up until 2014 the numbers increased (with the opening of lower and upper sixth forms in the general stream) to reach around 1,450 students today.

As far as mathematics is concerned we are engaged in many initiatives. On 14th March 2015, two lower sixth classes took part in Pi-Day at the Palais de la Découverte in Paris: during this memorable day, the students as special guests, were able to meet renowned scientists and took part in a series of conferences and workshops. Every year,  female students in Year 11 and Year 12  who wish to pursue scientific studies take part in the initiative “Filles et Mathématiques: une équation lumineuse” (Girls and Mathematics: a-brilliant equation). They take this opportunity to exchange views with female scientists. They atten 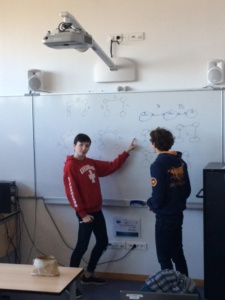 ded a conference, workshops and an interactive play on mathematics. Following those initiatives, a student was selected for a one-week internship in Pau University’s maths labs. The “Cordées de la Réussite” reinforces the move towards scientific and technological career paths. This initiative, incited by the Ministry, is aimed at students on scholarships. It allows high-level scientific courses to be introduced to students who wouldn’t dare consider undertaking them, by bringing together engineering students and secondary school students during visits to engineering schools, firms, foundation level classes and during cultural excursions. It should be noted that during this school-year, we are planning to widen the project by including pupils from junior schools that have entered special measures in our area.

And last, but not least, since 2013 we have been participating in the workshop MATh.en.JEAN: this workshop has been renewed every year with more and more students taking part.

The students who attend the workshops, from various social backgrounds, do not always have the opportunity to travel. The conference, which rounds off their year of research, is for them, about gaining awareness of others as well awareness of the outside world. Widening this awareness to Italy through twinning with a high school in Padua is only able to benefit those students who are motivated and determined. Beyond mathematical skills, they will also develop language skills for communicating in English.

The MATh.en.JEANS workshop was introduced at Vaclav Havel in the second school year, and twinned with Katsler High School with the help of Adrien Boussicault, a university lecturer and researcher in mathematics at the University of Bordeaux.  During the year, workshop students of both high schools meet for three seminars in one high school or the other: they talk face to face and compare their work. We enhance these meetings through e-mail exchanges or by using a collaborative digital word-processing tool, or a cloud. These communications devices have been added as we go along so that our students can discuss their progress as efficiently and as often as possible.

It is worth noting that Adrien Boussicault, a university lecturer and researcher in Mathematics at Bordeaux University, will continue to assist for the next three years in this workshop at Vaclav Havel as part of the partnership between the University of Bordeaux and the Maths and Languages Erasmus+ project.